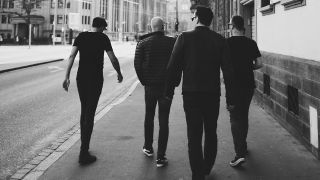 The Pineapple Thief have revealed they’ll host an online album announcement party this weekend for their new record Versions Of The Truth.

It’ll kick off tomorrow night (Saturday, June 27) at 8pm BST on the band’s Facebook page and YouTube channel, where they’ll discuss the new record and answer questions from fans.

Vocalist and guitarist Bruce Soord tells Prog: “It's ironic isn't it that the 'great pause' has actually motivated us to do things like this. We didn't realise until we tried it, just how much people seemed to enjoy being with us.

“We weren't on stage, we weren't sitting behind a desk signing things in the corner of a dark room. We were just in our studios having a good old-fashioned relaxing chat. And to have people from all over the world being with us – and each other – in one 'virtual' place is a really special feeling.

“One thing that struck me was how incredibly friendly and warm people were. There were no haters or trolls. I'm not sure what we've done to deserve to be treated so kindly to be honest, but I'll take it!”

Soord adds: “As we've just announced our new album, we thought why not do it again? It'll be all four of us in the band, chatting live with fans, talking about the new album and anything else that may come our way. And yes I'm planning to sing a song, probably a new one.

“I’ve done a few acoustic live streams from my studio recently so it's all set up nicely. It's not just me singing down into my rubbish iPhone speaker!

“So I hope people can come and hang out with us and probably more importantly, all the other TPT music lovers in the world too.”

Versions Of The Truth will be released on September 4 through Kscope, with the band debuting their latest single Demons earlier this month.

The Pineapple Thief’s planned headline tour for this autumn has been rescheduled for 2021. All tickets for the 2020 dates will be valid for the new dates. For refunds please check with point of sale.