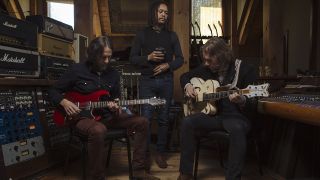 The Magpie Salute have announced that their new studio album will be released later this year.

It’s titled High Water II and comes hot on the heels of last year’s High Water I and will launch on October 18 through Provogue.

The record is said to pick up from where their debut left off, with much of the album recorded during those sessions at Nashville’s Dark Horse Studios. The remainder was recorded at Rockfield Studios in Wales following the conclusion of their 2018 European tour.

Speaking about the flow between both records, former Black Crowes guitarist Rich Robinson says: “Both records are part of a collective journey. I chose the sequence specifically for each record.

“I wanted High Water l to introduce us to the world and the world to us. With High Water II I wanted to get a little deeper. To take people places they may not have expected to go.”

He adds: “It’s all personal for anyone writing or listening. If you like the band, the music, the lyrics or if you’re writing these songs, there is an intimate relationship formed with the work.

“A song, a lyric can mean seven billion different things to people around the world because everyone around the song, writer or listener, will have their own individual life experiences and perspectives that colour and assimilate the song into their life experience. It’s pretty amazing if you think about it.”

To mark the announcement, The Magpie Salute have released a lyric video for the track In Here, which can be found below along with High Water II's full tracklist and cover art.