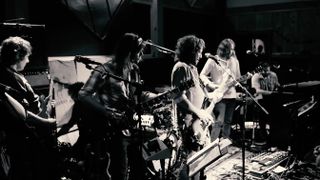 And to mark the announcement, the band have released a short trailer. Watch it below.

Robinson previously told Rolling Stone that he’d been performing regularly with the former Crowes men – minus his brother and vocalist Chris.

He said: “I just did three shows up in Woodstock, with me and Marc Ford and Ed Harsch and Sven from the Crowes. They came and joined my band and we did a whole bunch of songs together.”

Speaking of his experience of being in the studio, Robinson recently revealed: “I love being in the recording studio – it fuels the desire to create within me. I enjoy watching it unfold.

“Each development fires another idea and in the end, you have this organically created song that seemingly came out of nowhere. It brings me such joy and peace. It never ceases to amaze me.”

The 10 best guitarists, as chosen by Rich Robinson