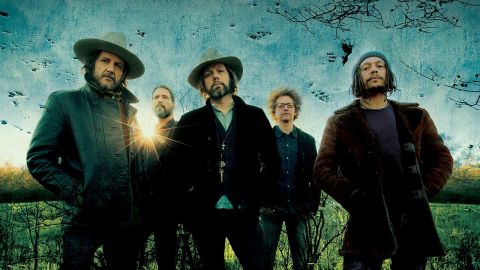 Considering their messy demise, it’s heartening to know that there’s plenty of life after The Black Crowes for some former members. Feuding brothers Chris and Rich Robinson vowed to carry on with their respective projects after breaking up the band on the eve of a proposed tour three years ago, the former immersing himself in the Chris Robinson Brotherhood, his younger sibling returning to his solo career. You get the impression, though, that guitarist Rich has been waiting for something more substantial to come along. Something like The Magpie Salute, in fact.

High Water I arrives on the heels of last summer’s promising self-titled album recorded live in Woodstock and comprised of covers and old Crowes tunes. If there’s an organic feel to it, that’s only to be expected, given that he’s retained his old band’s guitarist Marc Ford and bass player Sven Pipien. Also on board are keyboard player Matt Slocum and drummer Joe Magistro, both of whom featured on Robinson’s last solo album, as did singer John Hogg.

The latter, with whom Robinson has prior form in early noughties rockers Hookah Brown, is a crucial ingredient here. Hogg is a hugely proficient frontman and focal point, allowing Robinson room to direct the band across a variety of styles with shared roots in rock’n’roll, Americana and southern blues. Spending chunks of the past 12 months on the road has evidently served them well too, with these songs sounding joyfully lived-in, like the work of a band with an intuitive understanding of one another’s strengths.

They go for the big rock-out moments on Mary The Gypsy and the grandstanding Send Me An Omen, both of which sound like a return to Crowes dynamics, but the real gold is to be found elsewhere: a flashing slide-riff powers Walk On Water, a song as loose and rangy as early-70s Crazy Horse; Hand In Hand is the kind of tumbledown jam, as patented by Bob Dylan and The Band circa The Basement Tapes, that might easily have fallen flat on its arse in less capable hands; and it’s easy to imagine Can You See as an interlude in an old Sam Peckinpah western, a country-blues ballad picked around a low campfire under a setting sun, a moment of calm deliberation amid a changing landscape.

With High Water I The Magpie Salute have hit on a warm, rich vein of inspiration that might well sustain them for some time, making things look promising for High Water II which is scheduled for 2019.