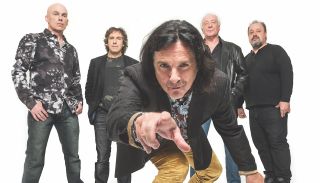 Marillion fans have voted for the prog legends’ greatest ever song.

Neverland, the epic track that closes 2004’s acclaimed Marbles album, topped a poll of The 50 Greatest Marillion Songs in a brand new special magazine dedicated to the band.

More than 8000 fans voted in the poll, which saw Neverland beating Kayleigh, This Strange Engine, Script For A Jester’s Tear, The Great Escape and Sugar Mice, all of which appear in the Top 10.

Also in the list of The 50 Greatest Marillion Songs are Fish-era classics such as Market Square Heroes, Fugazi and Slainte Mhath alongside Steve Hogarth-fronted anthems like Beautiful, Ocean Cloud and Seasons End.

The poll features in Marillion: Prog Special, a 148-page special edition magazine brought to you by the people behind Prog and Classic Rock.

As well as a rundown of The 50 Greatest Marillion Songs, the magazine also features in-depth stories behind the band’s classic albums, including Script For A Jester’s Tear, Misplaced Childhood, Clutching At Straws, Seasons End, Brave, Afraid Of Sunlight, Radiation, Marillion.com, Sounds That Can’t Be Made and FEAR.

In addition, the magazine features TWO brilliant covers for the price of one: a world exclusive Fish-era cover created by original Marillion album artist Mark Wilkinson on one side, and a Hogarth-era cover featuring the band’s long-running current line-up photographed exclusively for Prog on the other. Please note that both covers appear on different sides of the same magazine – they’re not available separately.

Check out some of the interviews and features in Marillion: Prog Special below.