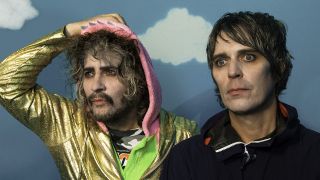 The Flaming Lips have released a stream of their new track All For The Life Of The City.

It’s taken from their new album King’s Mouth, which, although released on Record Store Day on limited edition gold vinyl, will launch worldwide on July 19 via Bella Union in the UK and Europe, and through Warner Bros in the US.

The 12 album tracks are threaded together by narration from The Clash’s Mick Jones, with the music tying in with frontman Wayne Coyne’s art installation, also titled King’s Mouth, which debuted in North America back in 2015.

Coyne tells Billboard: “We started out with a half-hour's worth of abstract musical, dynamic stuff, and that ended up being 10 minutes by the time we got to the first museum opening in Baltimore.

“Then everywhere we'd go people would think, 'This is going to be an album...' We didn't plan it that way, but I think it became more and more apparent that it could be a record."

The Flaming Lips have also announced three UK shows which will take place later this year.