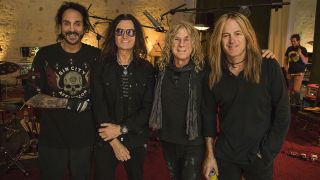 The Dead Daisies will return with their new studio album titled Holy Ground through Spinefarm Records later this year.

Recorded at Studios La Fabrique in the South of France, the album was produced by Ben Grosse (Dream Theater, Marilyn Manson, Sevendust) and will be the band’s first release since 2018’s Burn It Down – and their first with Deep Purple legend Glenn Hughes in the lineup.

The vocalist and bassist was brought into the fold last year after it was revealed that John Corabi and bassist Marco Mendoza would be concentrating on solo projects.

Now The Dead Daisies have given us a taste of what we can expect from the album by releasing a lyric video for their brand new single Unspoken, which you can watch right here!

Speaking about the new-look band, drummer Deen Castronovo explained: “When we started the new record with Glenn we knew we had something very special. I’m so proud of this record, more than a lot of others I’ve played on in the past!

“Glenn along with Doug Aldrich and David Lowy  created magic on this! We hope you’ll enjoy it as much as we did recording it!”

Guitarist Doug Aldrich added: “This was one of the first songs we jammed on at Sunset Sound in Hollywood and then reworked it slightly in France where we all hit it fresh with the benefit of a few months distance.

“In that process, David, Ben and everyone pursued ideas to give it a bit more of a Daisies vibe with Glenn’s vision guiding it to a place where it has become an instant classic.”

An official release date and further album details will be revealed in due course. Meanwhile, check out and enjoy these insightful clips from the studio HERE.