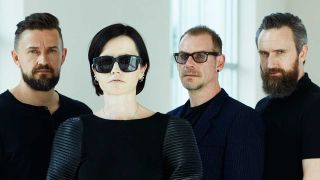 The Cranberries have released a new single, Wake Me When It's Over. The track comes from the band's eighth studio album, In The End, and arrives 14 months after the band's singer Dolores O'Riordan died in London at the age of 46.

“This was a song Dolores had been working on for a while,” says guitarist Noel Hogan. “It’s a fun song to play and it’s bright and quite uplifting. It’s very much a classic Dolores song with a soft verse and a massive chorus.”

“It’s hard to explain what turns a Dolores tune into a Cranberries tune," says drummer Fergal Lawler. "It’s just the magic when we play together and understand each other so well. It’s always been the same."

The album was produced by Stephen Street, who had also worked with the band on earlier albums Everybody Else Is Doing It, So Why Can’t We?’, No Need To Argue and Wake Up and Smell the Coffee.

"When we listened to the demos, the three of us and Stephen were thinking ‘this sounds much closer to the first album than anything else’," says Hogan. "Dolores was singing very softly on some songs, which was closer to how she would have sung back then, and the simplicity of some of the songs as well brought us back to that time."

Last September, Hogan confirmed that the album would be the band's last, saying, "We will do this album and then that will be it. There is no need to continue."

In The End is released on April 26, and is available to pre-order now.

The Cranberries - In The End tracklist