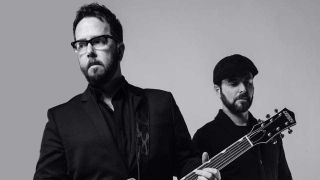 Indiana rock'n'roll duo The Cold Stares have released a video for their new single, Into Black. It's taken from the band's third album, Ways, which hit the virtual shelves at your digital retailer of choice last month.

Ways, the follow-up to 2018's Mountains, has since clocked up over a million album streams, as well as hitting the top spot on Amazon's Hard Rock Best Sellers list.

Into Black is the third single from the new album. The previous two – The Great Unknown and White Girl – were both voted into the podium positions on our weekly Tracks Of The Week roundup. It's a fiery slice of raw blues rock power, with a riff that thuds and a video to match.

"The location for the video was one of the oldest courthouses in America," says singer and guitarist Chris Tapp. "It oddly enough had these huge ballrooms upstairs that had been empty for years, and the basement and catacombs that run from the courthouse through downtown Evansville are on ghost hunters list for most haunted places in America.

"We were looking for a location that had some space to it and felt timeless. The story of Into Black is timeless in the way that the writer is searching for lost love across space and time and trying to bring that love back. Plenty of ghosts in the lyrics, and the setting felt right for that."

Ways was recorded at the legendary Sam Phillips Recording Studio in Memphis, where the likes of Johnny Cash, BB King, Howling Wolf and Elvis Presley recorded much of their early work.

Tapp says: "Sam Phillips studio in Memphis was on my radar for the blues EP, but when I started to really research the albums that had been made there we found that it was the one studio where really all three of our influences had really been recorded there.

"One thing we didn’t take into consideration was that making a record using a vintage based studio with great analog gear also meant us dealing with 70-year-old equipment which can be temperamental to say the least. What started out as a few days ended up being over a month of back and forth trips to Memphis to complete the album.

"We cut all the tracks live in the same room our heroes like Jerry Lee Lewis, Howling Wolf and Bob Dylan had. I sang on Wolf’s old microphone, and we sat at Sam’s desk upstairs and made revisions in the same chair Elvis sat in. We made an honest blue collar rock and roll record with a tip of the hat to our heroes, and hopefully left another memory in those walls."

The Cold Stares have some US dates lined up, and will join Joe Bonamassa's blues cruise as it sales the Mediterranean next summer.

The Cold Stares on tour