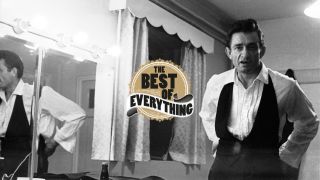 Tom Russell has recorded 35 records over course of the last four decades. Let that sit with you a second. Thirty-five. So, it follows, his back catalogue is a massively influential, if sprawling, body of work which takes its cues from various areas of folk, Americana, country, soul and most everything in-between. Chief among those influences is country icon – and Russell’s one-time contemporary – Johnny Cash. The most keenly-felt influence on an otherwise far-reaching back catalogue, Cash’s brand of simple and gentle melancholy has been a natural bedfellow to Russell’s work since he began.

Below, to mark the release of new album Folk Hotel, he joins us to give us a rundown of the Cash songs which have impacted him most over the years. More information on Folk Hotel can be found at the bottom of the page.

“Heard this back in the late 1950s. My brother had Cash’s first record on Sun Records – The Hot And Blue Guitars Of Johnny Cash. It had an art-deco cover. I thought ‘this guy is a bad ass, for sure.’ Later, of course, he did that great Folsom Prison live album. I do this song in a Johnny Cash medley – I sang it at the 2015 ASCAP Award in New York, because I won an award for my essay on Johnny Cash in the Wild West, which is in my book of music essays, Ceremonies Of The Horseman.”

“He sang this at Folsom Prison. He transformed T.J. Red Arnall’s original song, which was a taken off on the old song Little Sadie. It’s also been called Transfusion Blues. I like the Juarez references, because I lived in El Paso and used to hang out in Juarez. I saw mountains of cocaine when I worked as a bartender in a comedy bar in the 1970s. Cocaine seemed to fuel comedy – until John Belushi died, then most comedians tried to clean up.”

The Ballad Of Ira Hayes

“This is right at the top of my list. Written by Peter La Farge, the bronc-riding poet, playwright, and songwriter. Johnny recorded a full album of Peter’s Native American themed songs – the record is called Bitter Tears. Peter died in 1965 in New York. His sister Povy lived down the street from me in El Paso – I gave her a photo I had of Peter on a bucking horse in Madison Square Garden – it was signed to Woody Guthrie.”

“I wrote this, and of course it was a major thrill that Johnny recorded it on his Boom, Chicka, Boom record on Mercury. His version is also on a record of Tom Russell covers called The Wounded Heart Of America. I had the great pleasure of singing with Johnny In Switzerland – we hung out for a few hours. Magic. Some say he recorded my song Blue Wing, but it was never released, if so.”

“A great song about a flood that sounds like and old folk song. The story really builds ‘til the farm is floating away.”

“He wrote this one with Bob Dylan and it’s a very cool outlaw/cowboy song. ‘I went the wrong way into Juarez with Juanita on my lap…’ I loved that. He did a lot for Dylan and told Columbia Records not to drop Bob after Bob’s first record. They also sang some great duets, like Girl From the North Country.”

I Walk the Line

“I learned to sing this version as a kid. He brings full-on drama to this trainwreck song. Johnny successfully melted folklore and folksong with gut-level country. This stuff would be too raw for modern country radio, which plays stuff that sounds like processed meat from Walmart.”

Ballad Of A Teenage Queen

“Johnny wrote this song about Texas outlaw John Wesley Hardin, who was shot down by sheriff John Selman in El Paso. We used to visit Hardin’s grave, since there was a great Mexican Bar right across the street. Johnny wrote this for his cowboy record, Ballads Of The True West. I could have thought up another forty favourite songs, but these were on the top of my mind at the moment. To have known and sung with this man was one of the highlights of my life.”