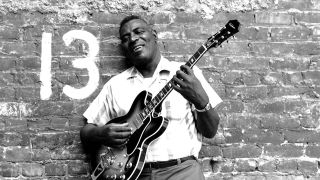 Black Stone Cherry’s Black To Blues RP pays tribute to the electric blues revival of the 1960s, when bluesmen like Howlin’ Wolf, Muddy Waters, Freddie King and Albert King saw their careers given a boost following the very vocal support of bands like The Rolling Stones.

Those bluesman have been a huge influence on Kentucky rockers Black Stone Cherry, whose Black To Blues EP includes a cover of Howlin’ Wolf’s classic Built For Speed.

Below, BSC guitarist Ben Wells picks his five favourite tracks by The Wolf…

Black To Blues is available to pre-order now.

Since the first time I heard Howlin’ Wolf, I immediately knew he was the voice of the blues. His voice is hauntingly perfect. I’ve always gravitated towards him as one of my favourite blues artists because his songs and his voice. His passion etc. just jumps out of the speakers. You can hear his aggression via the blues, and his voice absolutely commands attention. I love it!

I love this song and groove. My favourite version of this song is from his electric psychedelic album The Howlin’ Wolf Album he did in 1969. So awesome!

Again, my favourite version of this song is also from The Howlin’ Wolf Album. I can’t get over the groove. There’s even a flute on there! Very bluesy, very 60s psychedelic! Love it!

This is a song we did in our live set for years prior to us recording it. We loved the song, loved the groove, the title, the whole deal! It became a highlight in our set for us because it allowed us to branch out and really showcase the blues side of the band. And the audience loved it every night! We had so many fans ask us if that was our song! Once we told them it was a Wolf song, we then got asked if we had a recorded version of it! Well…now ya do! Enjoy!

His voice is epic on this track. We also recorded this song as a special bonus song for our last album, Kentucky. We did the Cactus version of the song. This song encompasses the mean, dirty, swanky, southern blues. Dare ya to listen to it and not feel something!

Another classic groove. The musicians on this song nailed the low down sleazy slinky vibe. A groove we try to nail constantly. I particularly love the piano in this song. Simple, but so effective and infectious. Makes you wanna dance, don’t it?!