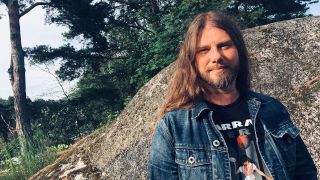 White Willow guitarist Jacob Holm-Lupo has released a teaser video for his new Telepath project, which you can watch below.

"Telepath is my fun project, a place to let off some steam and release the inner caveman," Holm-Lupo tells Prog. "A bit of thrash, a bit of doom, and a fair dash of 70s hard rock has gone into my cauldron of songs, and also more than a little of the kind of soundtrack music that accompanied the 80s horror flicks me and my friends used to love to watch (I still do!). So there’s that meeting of crunchy guitars and bangin’ drums with the synth sounds of Goblin, Fabio Frizzi and John Carpenter that basically defines Telepath."

Mental Mutations can be pre-ordered here.

Holm-Lupo is also putting the finishing touches to a third Opium Cartel album."That will be out this Winter, and also working my way through remastering the catalogue of Norway’s prog/fusion legends Ruphus," he adds. "Their 3rd breakthrough album Let Your Light Shine is getting re-released as we speak."