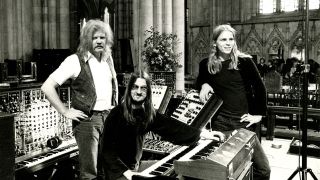 Tangerine Dream are to be celebrated in a major new exhibition at the Barbican Library. Zeitraffer (German for 'time-lapse') will run from January 16 - May 2. Admission  is free.

"Join us on an analogue journey through unseen footage, unpublished articles and original synthesizers with one of electronic music's pioneering groups," say the organisers.

Zeitraffer will feature uncovered photographs and videos, original synthesisers, cassettes and vinyl, the Barbican’s exhibition reveals London's key role in the international breakthrough of Tangerine Dream during the 1970s.

Further information about Zeitraffer can be found here.