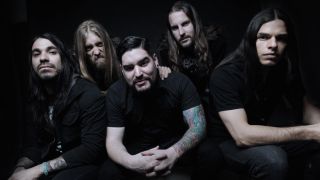 They’ve been working on the follow-up to their last full-length album, 2014’s You Can’t Stop Me – and Heylmun claims the as-yet-untitled record doesn’t mess about and gets straight to the point.

He tells Wall Of Sound: “It’s not gonna be full of computer trickery. It’s not gonna sound like all the ProTools ninjas and Logic ninjas. We got real microphones on real drums and real amps with real performances, real takes, real fucking everything.

“The record’s gonna be natural and raw and fucking pissed. It’s gonna be exactly what music needs, which is some fucking heart. Some fucking blood. Some real fucking ‘give a shit’ passion put down on to moments in time.”

“We recorded with tape on this record. There’s real music, it’s not samples. We just went for a record that speaks for us and really exemplifies where we’re at as a band. It’s gonna be something else for people to witness. Like a car accident they can’t keep their eyes off of.

Heylmun reports they didn’t want to compete with “music industry bullshit” and adds: “This is the first record that we’ve fully just put blinders on and we’re not looking at anything going on outside of us, just what’s in front of us. And what’s in front of us is our band.

“There’s no outside influence other than Suicide Silence doing what Suicide Silence wants to do. So it feels good. We’re far along in the process. The record won’t be out until next year but we’re deep in it.”

Suicide Silence are currently on the Straight Outta Hell tour. Once those dates wrap up, they’ll head out on the road across Europe throughout November and December.

Watch this metalhead cover Suicide Silence on Romania's Got Talent