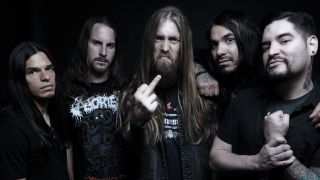 Having released the ear-wrecking You Can't Stop Me album earlier this year via Nuclear Blast, Suicide Silence have unleashed the beast with this new vid of Inherit The Crown filmed while on tour in the States with The Black Dahlia Murder.

The band are just about to embark on a headline tour of the UK with labelmates Thy Art Is Murder starting tomorrow (14th November). Dates below:

Get your tickets for these shows here.

You can buy the new album You Can’t Stop Me here and also win the chance to interview and hang out with the band on the London date of the tour.