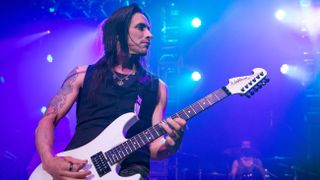 Extreme guitarist Nuno Bettencourt has apologised after full-frontal naked pictures of him were posted on his Instagram account.

Bettencourt, 50, says his personal computer files were hacked and the images put on his Instagram page without his knowledge. Images of his family were also posted in yesterday’s (September 20) hack.

The Instagram account was temporarily suspended while the leak was dealt with. The images were live for a couple of hours.

In a Facebook post, which has since been deleted, Bettencourt says: “I got woken up from a dead sleep with my door being banged on in my hotel room. I knew it could only be bad news, but once I was told what was happening, I couldn’t comprehend it.

“Basically, my accounts were compromised. But what’s worse were the photos.

“I want to apologise to all of you, my friends, my family, but especially my kids.

“I am sorry to those offended by the photos, but I’m more disappointed in the photos of my children being posted.

“From day one, I’ve kept my kids’ lives private. And I’m sad that that was violated.

“Thank you everyone who reached out and tried to help.

Extreme this month confirmed they’ve written “about 17 songs” for their upcoming album, the follow-up to 2008’s Saudades De Rock.

Loud And Proud Records will release an Extreme package titled Pornograffitti Live 25/Metal Meltdown on September 23. It’ll arrive on DVD, Blu-ray and audio CD and was recorded at the band’s show at the Las Vegas Hard Rock Casino on May 30, 2015, where they performed the record in full.