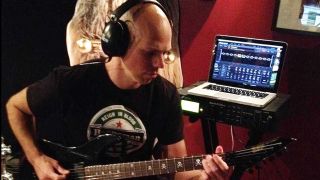 Corey Taylor and co have gathered in their studio to work on the follow-up to their epic House Of Gold And Bones double-act, released in two parts in 2012 and 2013.

They’ve posted a picture on Facebook with the explanation: “Josh Rand recording the covers album, day one.” No further information is available.

Former guitarist Jim Root recently spoke of his anger after being asked to leave Stone Sour earlier this year, and later revealed he’d been fired by phone, which he called “pretty lame.”

But he’s continued to work with Taylor on long-awaited Slipknot album .5: The Gray Chapter, out later this month. The frontman recently praised the guitarist’s work on the record, saying: “Jim came up with some killer stuff.”