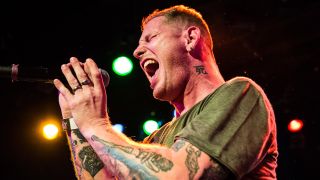 And its completion marks a longtime ambition for the singer and his band.

He hasn’t revealed any more details about the project, which was finally started earlier this month.

But Taylor tells The Jasta Show: “We’ve been talking about it for ever, since the first album came out. We always wanted this – it’s something we’ve always come back to. We never had the opportunity to do it and we just kind of said, ‘Well, screw it.’”

The title was inspired by drummer Roy Margoya’s studio in Burbank, where recording session have taken place. Taylor says: “There’s no pressure; you’re just having fun. You’re going back to these songs you just love to listen to, not only sing.”

Stone Sour parted ways with guitarist Jim Root earlier this year – although he’s said there’s no bad blood between him and Taylor as they continue to work together in Slipknot. Long-awaited album .5: The Gray Chapter just topped the US chart after reaching no.2 in the UK.