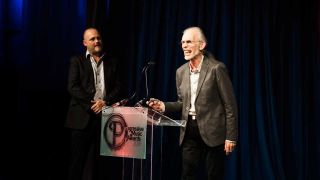 The 2018 Progressive Music Awards took place at the Underglobe at the world-famous Globe Theatre in London last night.

The seventh annual event celebrated the past 12 months in progressive music and was hosted by comedian Al Murray, with the cream of the prog world gathering for another memorable evening.

Yes legend Steve Howe had been previously announced as this year’s Prog God, and he was there in person to accept the coveted award towards the end of the evening.

Steven Wilson had been nominated in three categories and walked away with Album Of The Year for To The Bone and the UK Band/Artist Of The Year accolade.

Midas Fall picked up the Limelight award, Orphaned Land won Video Of The Year for Orpheus, while legendary Italian prog rockers PFM received the International Band/Artist Of The Year.

You can take a look back at all the evening's highlights on our live blog, while a video of the whole ceremony can be watched below.