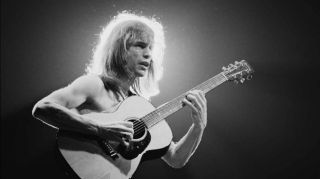 Yes guitarist Steve Howe will be honoured with the Prog God Award at this year's Progressive Music Awards. And comedian Al Murray will host this year's event for the first time.

Howe is currently on tour with Yes, who this year celebrate their 50th Anniversary.  “It’s an honour to be heralded as somebody of importance,” he told Prog. “I’m flattered. I keep my awards on top of my guitar rack and this one will be added to them.”

Al Murray was equally effusive about being involved with the Progressive Music Awards this year, telling Prog, “I'm delighted to be asked to present the Prog Awards this year. Prog's a real of a passion of mine – as anyone who follows me on Twitter will know – and when I went to the event last year I knew I was among my people.”

This year's event takes place at The Underglobe, beneath Shakespeare's famous Globe Theatre on London's South Bank, on Thursday 13 September.

Voting is currently underway for the reader voted categories.