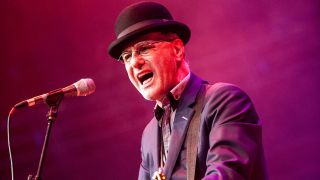 Steve Harley has reunited the surviving members of Cockney Rebel’s Best Years Of Our Lives lineup for a 16-date UK tour.

To celebrate the 40th anniversary of Steve Harley & Cockney Rebel’s 1975 album Best Years Of Our Lives, guitarist Jim Cregan, drummer Stuart Elliot and keyboard player Duncan Mackay will join Harley on the tour, which kicks off in Manchester on November 2.

The shows will be the first time the lineup has played together with Harley since 1976.

Harley says: “The three guys are still my mates. The fun we had back then, when we toured and recorded together, holds fabulous and special memories. I take life on the road a lot more seriously now, though, so they’d better be prepared.

“I’m thrilled to think they’ll be up there on the great UK concert hall stages with me once again.”

The shows will comprise two sets. One will be The Best Years Of Our Lives album itself in its entirety, along with a few B-sides. The other set will be comprised of tracks chosen by a fans poll via the Harley website and social media.

The Best Years Of Our Lives was last year reissued in a deluxe format.