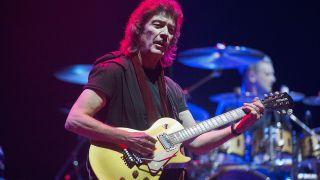 Steve Hackett will headline next year's Cropredy festival with his Seconds Out set, with the likes of Trevor Horn, Clannad, Rosalie Cunningham, Richard Thompson and of course Fairport Convention all appearing.

This year's festival takes place at the usual Cropredy farmland site near Banbury in Oxfordshire between August 13-15.

"We're really pleased with this year's line-up," Fairport Convention bassist Dave Pegg tells Prog. "It consolidates Cropredy’s core appeal, celebrates Fairport’s rich heritage and also introduces a wide and diverse range of music. It'll be a particular pleasure to have Richard Thompson playing with us again during our three-hour headline set on the Saturday evening."

Fairport Convention's traditional Saturday evening closing set will celebrate the 50th anniversary of the band's Full House album. The Full House line-up of Simon Nicol, Richard Thompson, Dave Mattacks, and Dave Pegg will be joined by Chris Leslie (standing in for the late Dave Swarbrick) to play the whole album.

The full line-up is:

Cropredy three-day tickets are on sale from Monday 2 December 2019. The first 1,000 orders will receive a Christmas card signed by all five members of Fairport Convention the first 2,000 will get a souvenir Cropredy car window sticker.