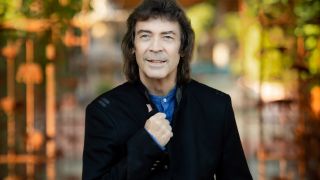 It’s titled At The Edge Of Light and it’s set to arrive on January 25 on CD, 2LP/CD, on digital platforms and as a Mediabook CD/DVD, which will contain 5.1 surround sound mix and a behind-the-scenes documentary.

The follow-up to 2017’s The Night Siren will feature 10 tracks which will range from “guitar driven rock to epic orchestration.”

Hackett says: “”In these dangerous times, deep shadows feel even sharper than usual and we find ourselves standing at the edge of light.

“The contrast between dark and light weaves its way throughout the album in many ways, from the sense of good fighting evil through to the interplay of dark and light opposites magically combining in cultures, including the heartbeat of India and primal tribal rhythms.

“Ultimately, this album embraces the need for all musical forms and cultures to connect and celebrate the wonder of unity in this divided world.””

Hackett recorded the majority of the record at his own studio with engineer Roger King and it features a raft of musicians and vocalists including Nick D'Virgilio, Simon Phillips, Jonas Reingold, Rob Townsend and vocalists Durga and Lorelei McBroom.

Pre-order details will be revealed in due course, while the cover art and tracklist can be found below.

Hackett will head out on the Selling England By The Pound UK tour next month.

Steve Hackett - At The Edge Of Light
1. Fallen Walls And Pedestals
2. Beasts In Our Time
3. Under The Eye Of The Sun
4. Underground Railroad
5. Those Golden Wings
6. Shadow And Flame
7. Hungry Years
8. Descent
9. Conflict
10. Peace