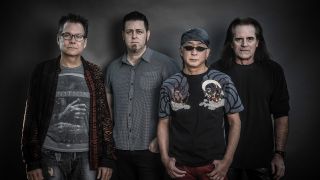 InsideOut Music, one of the leading progressive music labels in the world, celebrate their 25th anniversary this year and Spock's Beard and The Flower Kings will head out on tour to celebrate later this year.

"Spock's Beard is excited to announce an upcoming Winter tour!  It will be a co-bill with Roine Stolt's The Flower King’s revisited band, so each show promises to be a great evening of music," the band told Prog. "We've been getting a lot of questions about who will be playing drums on this tour, so at this time let me introduce our new touring drummer, Mr. Mike Thorne, from Saga!  We are really excited to have him on board and are looking forward to seeing you on tour."

Roine Stolt added, "Asked to put together a band  to go on the road, celebrate our label Inside Out's 25 year anniversary - I was thinking of the 'treasure' that is the music I wrote for The Flower Kings during that same period. I felt compelled to bring out this music for yet another round – and in the process bring in some old friends and some new. The music is universal - some songs timeless - and by November I hope to have an exciting set-list - to not only celebrate my 1st album and the origin of all things The Flower King - but to cover the rest of TFK's history - and eventually a new tune & a few new faces. Tune up the engine - Time to prog!”

Many of InsideOut’s longest running relationships will see new albums released in the labels 25th year, including Spock’s Beard’s 13th album Noise Floor, a new collaborative project called The Sea Within that features Roine Stolt, Daniel Gildenlow & Jonas Reingold (all veterans of the label), a landmark live album from Devin Townsend filmed at a special performance at a Roman Theatre in Bulgaria, a new studio album from Riverside & much more.

This year will also see InsideOut release a whole host of lavish catalogue releases throughout 2018, including the second part of The Flower Kings A Kingdom of Colours CD box sets, a series of Devin Townsend high-end vinyl boxes, a CD collection covering the whole of Enchant’s illustrious career, & much more yet to be announced.

The live dates are: