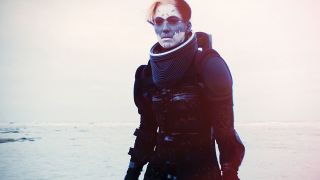 She’s a fan of film composers Ryuichi Sakamoto, Trent Reznor and Angelo Badalamenti, and specifically the sci-fi/dystopian future-world soundtracks of Vangelis (Blade Runner), Cliff Martinez (Solaris) and John Carpenter (Dark Star). She worked on her second solo album, 2007’s The Deep Blue, with Eric Drew Feldman, keyboardist and bassist with Pere Ubu and Captain Beefheart, who introduced her to Beefheart and Frank Zappa, Todd Rundgren’s A Wizard, A True Star, early Yes (circa Heart Of The Sunrise and Siberian Khatru) and King Crimson – she was already, via David Bowie’s Berlin Trilogy, “obsessed with Robert Fripp”.

Something of a polymath, she has been a session musician with, and collaborator with, everyone from Bryan Ferry and Bat For Lashes to XTC’s Andy Partridge and extreme electronicist Squarepusher. In 2014, she composed the score for The Last Man, a dystopian sci-fi short directed by designer and VFX artist Gavin Rothery, and is about to start work on her first feature-length score. She is currently studying orchestration, and has ventured into theatre – writing the music for the acclaimed NHS-themed London stage play This May Hurt A Bit – and the world of advertising. And she has just made available for streaming the Night Vision EP, comprising radical reconstructions, heavily industrialised in some cases, of movie music, from Repo Man and Rejoice In The Sun to a barely recognisable How Deep Is Your Love.

Her latest foray is her proggest yet. Her fourth solo album, and first in almost nine years, True Love, is influenced by what she calls “science fiction realism”. It is a “cinematic, melancholic pop record”, a break-up concept album about an Earthling travelling to far-off planets looking for love. It was composed using vintage keyboards, several of the songs written with fellow sci-fi enthusiast, Michael Lovett of NZCA Lines, who is also a “big prog fan”, with whom Hatherley shares a fondness for Genesis’ The Lamb Lies Down On Broadway. Not that you can hear it on True Love, but what it and …Lamb… do have in common is an epic scope and a protagonist whose story you follow from beginning to end.

“My reference points were Vangelis’ Blade Runner and Bowie’s Low,” Hatherley tells Prog. “Over the last few years, I’ve got more into writing with keyboards and I wanted to stop writing on guitar because I wasn’t coming up with anything particularly exciting. Now I’m a massive synth geek.”

For the project, the erstwhile indie musician has metamorphosed into a flamboyant, fully developed character called Traveller. You can see her in the video for the single A Sign, directed by Rothery, featuring Hatherley in full Traveller make-up and space suit, walking along a beach in a far-flung oceanic world, with two suns in the sky and a ringed planet on the horizon. Roeg one, anyone?

“The idea of someone adrift and unmoored, who is lonely and wants to get home, does have similarities with Thomas Newton in The Man Who Fell To Earth,” she agrees. “By her own choice, she is travelling around the universe, in self-imposed exile, trying to find love.”

This isn’t Hatherley’s first dalliance with an alias. Circa 2012, after a few years out of the indie spotlight, she re-emerged as Sylver Tongue.

“I wanted to be a bit unknown and escape the ‘Charlotte from Ash’ thing,” she offers of a guise that had more of a garish 80s vibe, with, Hatherley notes, “lots of Mad Max fake fur and leather”. This Traveller incarnation is, by contrast, “less 80s revisited, more weird and arty, more [Soviet filmmaker] Tarkovsky and Roeg”.

For the interview in a bar in London’s Barbican Centre, Hatherley, sad to report, doesn’t arrive in full Traveller regalia. Instead, she is wearing an electric blue shirt and corset which, she says, make her resemble “an intergalactic witch”. Still, it’s a far cry from the jeans and T-shirt mode with which we became familiar during her tenure with Ash. Then again, a lot has changed since she left the band in 2006.

“Grey Will Fade was my XTC-meets-Weezer punk pop record, not far from Ash,” she recalls of her 2004 solo debut, made while she was still with the band. “Then I made The Deep Blue just after I left Ash. I was in Italy, having a major fucking meltdown, trying to get my head around the fact that I’d left this band I’d been with for eight years, since I was 18. I went a bit mad making that record.

“Some people really like it. I don’t know…” She sighs. “It’s a weird one. I was listening to a lot of Kate Bush.”

“He liked Grey Or Fade, so I went to Swindon and wrote some songs with him in his famous shed,” she says of her team-up with one of her all-time heroes, who she found “eccentric but pretty normal”. As for the record, which cost a small fortune to record, she considers it “moody”, concluding of an album that peaked at No 109 in the UK Albums Chart, “I’m not sure if it’s what people wanted.”

Her third solo album, 2009’s New Worlds, was recorded live in a week and saw a return to her straight pop punk roots, or as straight as she could manage: Hatherley’s songs tend towards the sectional and complex, with lots of chords and twitchy shifts in tempo. Or as she puts it, “Some of that stuff is fucking bonkers. I don’t know if I’d ever write anything like that again. I was aspiring to, not quite math rock, but more adventurous songs with key changes and time changes. The sort of records that musicians like and no one else.”

Make that musicians and comedians. Tim Smith from the Cardiacs is “a big supporter” of hers, as are Partridge and Kavus Torabi of Knifeworld. After writing a song called Kim Wilde for her debut album, she was invited to record a version of Kids In America with the 80s pop star herself. And for Hatherley’s 2005 single Bastardo, her ex-boyfriend Edgar Wright (Spaced, Hot Fuzz, Shaun Of The Dead) directed a splendid comic strip-type video, featuring cameos from David Walliams, Simon Pegg, Lucy Davis and Julia Davis.

True Love should see her reach an even broader audience. Hatherley is happier than ever with her songwriting. Amid the atmospheric electronica and analogue synthscapes, there are some supremely infectious pop songs (the last track, You Said Goodbye, features Green Gartside of Scritti Politti). Prog suggests that, in parts, it sounds like a Madonna album produced by Thomas Dolby.

“I’ll take that,” she says. “Sylver Tongue was very 80s-infatuated but I didn’t want this album to be shiny 80s, but muddy and dirty, with a nod to 70s soundtracks, Italian horror movies, with frizzy, fucked-up, wonky synth sounds.”

That said, she accepts that it is “very melodically driven. No matter how hard I try to write atonal, weird stuff, I always end up more McCartney than Lennon.” She laughs. “I don’t know how I feel about that.”

“Those first three records weren’t very emotional,” she admits. “There wasn’t much of me in there. For this record I thought, ‘Fuck it, I’m just going to put it out there…’ In a sophisticated pop way, of course.”

“It’s a very personal record – I had an awful break-up. I won’t say who with – he was a musician. It was a very unhealthy relationship, at a time in my life when things were quite difficult. So I spent the last five years being single, travelling and working. The songs came out of this period of loneliness. I’d never been single before so it was an important, soul-searching time.

“I felt so confused by what true love really was,” she continues. “I was lost in the landscape of this relationship, completely unmoored: ruined by it, really. Maybe it was collateral damage from previous relationships, or maybe I’m just rubbish at the relationship thing. It opened up all sorts of shit!”

Hatherley spent long stretches on the road, touring with KT Tunstall and others, simultaneously isolated and alone and enjoying the solace in cities as alienating as Tokyo and Hong Kong.

“I’d be with all these people [in bands] but I’d be alone at the end of the night,” she remembers. “I began to romanticise this idea of loneliness, the melancholy of being single and all those tragic, lonely, fucked-up people in films like Blade Runner.”

Since making True Love, Hatherley, if not Traveller, has found love, although she still recognises the benefit of “being confronted by the scary terrain of your own mental health”, which is why she enjoys meditating and is currently studying, in what little spare time she has left, to become a yoga teacher.

“I’m immersed in futurism and science fiction but I also like being connected to something ancient, like the ritual of meditation,” she explains. “I want to help people, because everyone is in pain, whether it’s mental or physical.”

Other plans include solo gigs next year, at a to-be-confirmed London-based space and science festival, currently being assembled by a senior adviser at the Space Agency. And working with visual artists in Poland “who have done a lot of work with the European Space Agency”. There’s a theme here.

“I just want to do stuff I’d like to see,” she clarifies. “I’d be bored if I was just doing a four-piece band thing.”

It’s a long way from Ash.

“People change, don’t they?” suggests the sometime intergalactic witch and Traveller. “When I joined that band I was so young and it defined me in terms of my personal creative output. But I’ve done so much now that I feel quite removed from it, and that’s liberating.

“You know,” she adds, explaining how her penurious circumstances indirectly led to True Love while offering a sense of the scale of her imagination, “I was having a really shit time and [former Creation Records boss] Alan McGee advised me to write an acoustic album and just go and tour the songs without have to pay anyone. So I went off and made a mental fucking concept album that I don’t know how on earth I’m ever going to make work live. But I’d have hated the idea of having to lessen my ambitious vision just because of budget concerns or whatever.

“I think I do make life harder for myself,” she allows, finally. “I’ve made a record that is pretty pop, but also quite esoteric. It’s somewhere in the middle. And that’s where I’ve always been, really. If I was more calculated I’m sure I could have made it more pop or more weird.” She laughs again. “But I prefer to be in this awkward place in between.”

True Love is available now and is self-released. See www.charlottehatherley.com for more information.

The Story Behind The Song: Girl From Mars by Ash