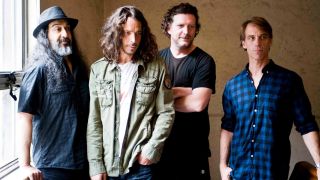 Soundgarden guitarist Kim Thayil says the material written for their next album has benefitted from the members’ maturity and experience.

And he insists that, despite their 13-year break, the strength of their relationship has never wavered.

The band regrouped in 2010 and released sixth album King Animal two years later. They aim to record the follow-up in 2017, with drummer Matt Cameron having said in July that the project was “off to a very good start.”

Thayil tells Full Metal Jackie: “With any relationship – family, loved ones, boyfriend or girlfriend – after a period of time you grow apart.

“But after this long period of time we’re still sort of where we were at with each other. That’s been a very positive thing.

“When the band was not together we were all still in touch, sharing social circles and friends, so we were always doing things together and running into each other.

“It was just a matter of getting the four of us all on the same page and willing to do the work to keep the Soundgarden machine going the way it was when we split.

“I think the added maturity and growth is probably a bonus as well.”

Album work is on hold while frontman Chris Cornell undertook a solo tour and Cameron worked with Pearl Jam.

Thayil reports: “Matt and Chris, of course, are working on this Temple Of The Dog thing.

“Over the past year we’ve had a number of songwriting and jam sessions, getting together to exchange ideas and document and record them. We have some rough demos of a dozen or so songs.

“We’ll continue to do this as everyone’s schedule opens up, and hopefully by next year we’ll find ourselves in the studio fleshing out these ideas.”

Thayil is also working on a remastered version of Soundgarden’s Ultramega OK album and a box set edition of Badmotorfinger, with the intention of releasing both before the end of the year.