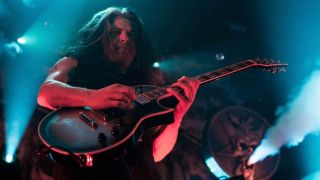 I’m not gonna name any names. But some solos, especially at this point in time, in hard-rock and metal, sound interchangeable. Like, you could just grab a few bars and paste them into other tracks, and it’s not gonna be that different. There’s just a certain type of lick that happens very often. And, y’know, it’s technical and it’s challenging, but it isn’t memorable and it doesn’t do anything for me, really.

What’s the secret to shredding with soul? Well, you should have some parts that are singable. Obviously, if you could sing the whole thing easily, then it wouldn’t be a shred solo. But y’know, if you think of the end of Mr Crowley, you can sing it in your head. It’s recognisable. It’s a piece of music.

You can also play melodies, and then in-between, you throw in the shred. You can connect notes by shredding. It’s about getting away from this idea that it’s just this free-for-all shred-fest. Instead, you want to be creating melodies, and then maybe for a section here and there, you can really burn and go for it.

On the song True American Hate, the music is so fast – y’know, I’m playing to Gene Hoglan blastbeats, so I’m sorry, but you kinda need to go fast – but I was able to find some long notes that have a melody and I think a good feel.

A shred solo shouldn’t be totally raw – unless that’s what you’re going for. But usually it’s best when you’ve spent some time with it, it’s developed, it’s tweaked, but it’s not worked-on to the point where it loses its spark and sounds too perfect. That doesn’t interest me, either.

So it’s really about the balance of having something that’s worked-out, but also sounds just raw enough to be a little dangerous. For me, that’s what I love about the classic Van Halen solos, because it sounded like at any moment he could just fall apart. It was all on the edge, but it always came back. The Randy Rhoads stuff, too. Y’know, the great playing of that time period, when you didn’t have Pro Tools and Logic, and you couldn’t record a hundred different solos and cut-and-paste something out of it.

I’d rather hear a solo that’s memorable than one that’s technical. At the same time, I like technical playing. I like the excitement of something virtuostic. Speed is definitely a part of what I do, and I have moments where it goes into very fast territory. But it’s never been my main thing.

I’m not as fast as Vai and Satriani, Yngwie and guys like that, where it’s just blistering. I can share a stage with those guys, and make it work. In fact, I was part of Satriani’s G4 last week, along with these ridiculous players like Eric Johnson. I’m not gonna out-speed those guys, but it feels like I have a place at the table.

There’s just other elements that interest me besides speed. I love melody. I love blues attitude. Dynamics. That’s one of the reasons I do projects outside of thrash-metal, because I’m sorry, but thrash-metal is not about dynamics. So I try to bring all those other elements to the table. I’d rather hear a solo that just really makes a statement, and you can play it out of context, and you’ll say, ‘Oh, I know exactly what song that is’…”