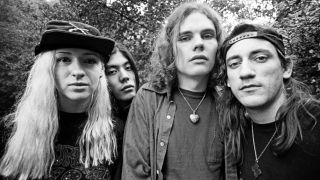 Drummer Jimmy Chamberlin says he and Billy Corgan have been discussing getting the original Smashing Pumpkins lineup back together in 2018.

In August last year, frontman Corgan revealed he had rekindled his relationship with bassist D’Arcy Wretzky after not speaking to her in 17 years.

And in a new interview, Chamberlin reveals that talks are underway to reunite Corgan, Wretzky and guitarist James Iha for possible live shows next year.

He tells WGN Radio: “We were talking about playing next year with the band and somebody asked me, you know, ‘What’s it like trying to coordinate that?’

He continues: “Musically, we’ve never been at odds. Since 1988, I don’t think Billy and I have ever argued about music. Our musical relationship is that intact.

He adds: “When Billy and I get together, amazing things happen. We’ve written some of the greatest rock songs of all time. They’re not perfect. When I listen to them I make faces, but again, they are honest representations of where we were at that time – and that for me is exciting.”

Wretzky left the Pumpkins in 1999 with Iha following a year later. Chamberlin has been in and out of the group over the years, most recently rejoining in 2015.

The Pumpkins released ninth album Monuments To An Elegy in 2014.