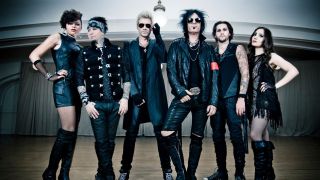 Sixx AM will release new single Rise in March and have asked fans to help them compile a US tour schedule.

The track will appear on the first volume of a double album due out later this year. It’ll be the band’s fourth album and the follow-up to 2014’s Modern Vintage.

Mainman Nikki Sixx says: “We are not a political band, but we are extremely reflective. During the making of this album, we were under the same media siege as the rest of the world, so Rise came out of that and hopefully reminds people that we all have a voice.”

Guitarist DJ Ashba adds: “Rise is a message of empowerment. It will take on a personal meaning to everyone who hears it, but the message is the same. Whether it’s an individual trying to overcome their own struggles, or a nation as a whole, we can all rise above the negativity, if we stand up for what we believe in.”

Meanwhile, in a video message to fans, frontman James Michael reveals the band will launch a headline tour in the spring.

He says: “We want you to help us decide where we should play, so head on over to sixxammusic.com to demand that we come to your city.”