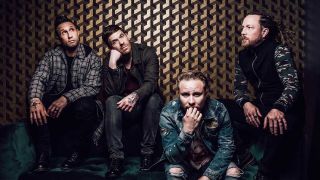 Shinedown have released a video for Atlas Falls. The song – a typically uplifting rocker originally written during sessions for the band's Amaryllis album – was previously available as part of a t-shirt/song bundle launched in March to raise money for Direct Relief, who provide humanitarian medical resources around the globe.

“The response to Atlas Falls has been overwhelming," says frontman Brent Smith. "Barry, Zach, Eric and I cannot say thank you enough to Shinedown Nation and everyone around the world that has supported Direct Relief during the COVID-19 response.

"The faith, the love, and the showing of humanity has just been incredible. Atlas Falls is a reminder that we are at our best when we need each other, and the only way through this is together.”

The bundle has raised more than $300,000 for Direct Relief, who are currently engaged in providing personal protective equipment to frontline health workers battling the coronavirus pandemic..

“Direct Relief is so deeply grateful for the extraordinary commitment of Shinedown Nation to help keep health workers safe as they put themselves at risk to keep all of us safe,” says Direct Relief President & CEO Thomas Tighe. “This support translates into immediate, practical help, and is such a wonderful example of everyone pulling together and doing whatever we can to protect those who are most vulnerable.”

The t-shirt is still available, while Atlas Falls itself is available now on all streaming platforms.