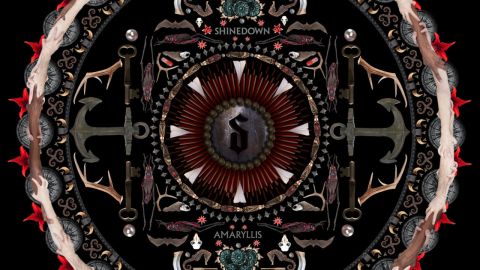 Bizarrely bearing the name of the Triffid-like blooms so beloved of mums and maiden aunts post Christmas, Shinedown’s follow up to the breakthrough The Sound of Madness album finds the band mercilessly gearing up to own radio station playlists the world over.

Unsurprisingly, Brent Smith’s powerhouse vocals are the focus as he delivers gargantuan hook after hook. It shouldn’t be possible (or legal) to cram so much addictive ear candy onto an album – hell, even the hooks have hooks.

Predictably, with Rob Cavallo producing again, the songs are meticulously honed for maximum impact as arena-pleasing singles, so anyone expecting the pacey aggression of opener Adrenaline to be maintained will be disappointed as the majority of the songs – Miracle, I’ll Follow You and the title track, to name but three – are mid-paced melodramas that would lend themselves nicely to car or bank adverts.

The vicious bite of Enemies and Nowhere Kids does redress the balance slightly, but otherwise it’s Smith going all misty-eyed to the strains of swooping strings, not least on sentimental album closer Through The Ghost.

If Brent and Rob have their way even your mum and Aunty Madge will soon be fans – suddenly that album title is starting to make sense.