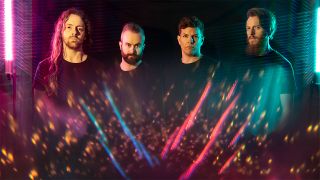 Shattered Skies have released their cover of Alanis Morissette's You Oughta Know. You can watch the whole video below.

"It all started when myself (Ian, guitars/keyboards) and Gerry (Brown, vocals) realised we have a shared love of Alanis Morissette's music, especially the album Jagged Little Pill, and we pretty quickly realised this song has a great groove which would lend itself well to our groovy prog metal sound, so I went right ahead and put together this arrangement," guitarist and keyboard player Ian Rocket tells Prog. "I didn't even have to the change the key of the song, which is a testament to Gerry's vocal range.”

"Super excited to play this one, we've been friends with Voyager for a while, I saw them at the Underworld a while back and they were great, and I know a couple of them are fans of our work too, so it makes total sense for us to share a stage," Rocket adds. "229 is a very cool venue in Central London as well so this Sunday should be an epic night!"

Tickets for the Voyager show are available here.