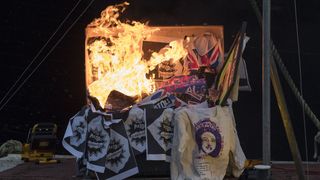 Joe Corre, the son of late Sex Pistols manager Malcolm McLaren has set fire to punk memorabilia said to be worth £5 million.

He, along with his mother, fashion designer Vivienne Westwood, set fire to the items in the middle of London’s River Thames on Saturday – the 40th anniversary of the release of Sex Pistols debut single Anarchy In The UK.

The protest was aimed at Punk London who are marking “40 years of subversive culture” with a series of shows, events and exhibitions.

According to the BBC, Corre told the crowd: “Punk was never meant to be nostalgic – and you can’t learn how to be one at a Museum Of London workshop.

“Punk has become another marketing tool to sell you something you don’t need. The illusion of an alternative choice. Conformity in another uniform.”

McLaren died in 2010, but Agent Provocateur founder Corre reported that if his father had still been alive, he’d have found the occasion “hilarious.”

Corre said: “He would have taken this opportunity to say something about punk rock now being owned by the corporate sector. Whether or not he would have agreed with burning all the stuff – and I think he probably would have done – I think he’d think it was kind of hilarious.”

Reacting to the news, Sex Pistols bassist Glen Matlock told Sky News: “I want to paraphrase Monty Python – he’s not the saviour, he’s a naughty boy. I think that Joe is not the anti-Christ, I think he’s a nincompoop.”

The move has also caused anger, with Twitter account The Hayseed Diaries tweeting: “Might have been better to sell it and give the money away? Utter idiotic waste.”