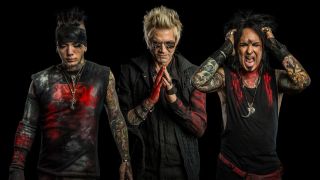 Nikki Sixx says that he and Sixx AM bandmates DJ Ashba and James Michael are “constantly evolving” and states that there’s no “shelf life on creativity.”

And Sixx reports that the ideas just keep coming – with work on what will be their sixth album already underway.

He tells The Aquarian: “I think that one of the keys to Sixx AM is, and all due respect to Motley Crue… what a great run we had, great brotherhood, and great body of work… but as an artist, you just keep creating. I don’t think that there’s any shelf life on creativity.

He continues: “With Sixx AM the answer is never ‘no’ – it’s always ‘yes’ and that I think is the key to part of our camaraderie and our brotherhood and the fact that we’re constantly evolving.

“No matter what it is, it’s about us feeling good. So, being good to each other, being friends, having fun onstage. If someone has an idea, let’s try it! The only way a song doesn’t work is if you flush it out and you go, ‘That didn’t turn out quite the way that we thought.’

“It doesn’t take one person to say that. The song says it for you once the ego is out the door. That’s how we were able to do a double album this year and we’re already writing music for the next album. That’s something we’re proud of and it feels good.”

Last month, Sixx AM release their track Barbarians and previously revealed a video for We Will Not Go Quietly.

The trio are currently on tour across the US and will play the Newark Prudential Center, New Jersey, tonight (November 26).

Sixx AM: how Nikki Sixx dumped the “rotting carcass” of Motley Crue