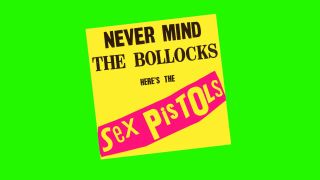 Sonically, the Sex Pistols’ debut stripped rock’n’roll back to its first principles. Visually, its sleeve did exactly the same.

“The only real thing about Never Mind The Bollocks was that it had to look ugly,” recalled their late manager Malcolm McClaren. “We came up with the ugliest cover we could think of; that in a sense would attack the idea of super-graphics. I wanted to make ugliness beautiful.”

The Pistols needed a renegade artist to make it fly, and McLaren knew just the man. In 1976, he wrote a short telegram to Jamie Reid, with whom he’d studied at Croydon College Of Art in the late 60s: “Got these guys, interested with working with you again.”

Reid was already several years into his career by this point, and his CV made interesting reading. As well as illustrating an anthology on the situationists (a 1950s movement of artistic pranksters), this son of a liberal newspaper editor had himself spent five years at the helm of a political rag called Suburban Press (sample headline: ‘Save Petrol – Burn Cars!’).

As it turned out, many of Reid’s ideas from this last project would be carried over to Never Mind The Bollocks…

“The style of punk was something that was actually formulated a good few years before,” he explains, “when myself and a collective of people in Croydon were running an anarchist printing press. The style of punk came directly from that. It wasn’t the pop phenomenon that interested me.”

“It all came out of that 60s art school thing,” McLaren remembered of the sleeve’s genesis. “Anarchic, nihilistic, intellectually looking to change life. Changing life meant being an outlaw. Being an outlaw meant being a criminal. And we thought that was something that artists and criminals have in common.”

Fitting, then that the …Bollocks sleeve combined its lurid colours with lettering arranged in the style of a ransom note. That process may have caused Reid “enormous aggravation”, as the title and the contents of the album were shuffled by the band, but it nailed punk’s much-touted DIY ethos as succinctly as any of the three-chord anthems within, and was duly adopted by countless bands in the movement.

It was, Reid concludes of the sleeve, “intended to articulate ideas, many of which were anti-establishment and quite theoretical and complicated” (although, at his more playful, the artist has dismissed it as “cheap hype”).