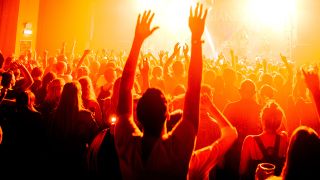 Scientists in Germany are enlisting the help of music fans to try and better understand how they can prevent the spread of coronavirus in live music venues.

The Guardian report that 4000 people attending singer/songwriter Tim Bendzko’s show in Leipzig on August 22 will be given neck-worn devices which will collect data on their movements, while fluorescent hand sanitiser will allow the scientists, with the aid of UV lights, to see how fans are interacting with surfaces.

Those attending the show will also be sent test kits and have a swab taken two days prior to the event at a lab. They’ll also be given a face mask with valve.

Head of clinical infectious diseases at the University Hospital in Halle, Stefan Moritz, who is spearheading the experiment, says: “We are trying to find out if there could be a middle way between the old and the new normal that would allow organisers to fit enough people into a concert venue to not make a loss.”

Scientists hope to present the data to the public in early October.

It was recently announced that music venues and theatres in England would be allowed to reopen from August 1 as long as strict social distancing measures were in place.

Plans for venues in Scotland, Wales and Northern Ireland to reopen will be decided by the devolved administrations, however, drive-in events will be allowed in Scotland from tomorrow.