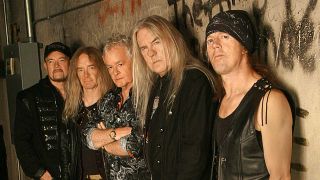 Saxon have released a video for The Secret Of Flight, the latest single to be taken from their Thunderbolt album. The song retells the story of flight via the medium of heavy metal thunder, taking in all points from Icarus's disastrous approach to the sun, via the Wright Brothers, to the dropping of the bomb. There's even time for a short physics lesson.

"2018 is turning out to be another monumental year for Saxon," says frontman Biff Byford. "After storming across the North America with the Thunderbolt tour, we are releasing The Secret Of Flight from the album as the new single & video.

"Being in a touring band we fly a lot. So I was sat on a plane one day, thinking that – in the big scheme of things – we didn’t discover how to fly until quite recently in man’s history, in 1903. That’s only 115 years ago.

"I thought it would make a good subject, so there you go…. the secret of flight!”

"The track has already proven to be a live monster song so as we are half way through the year’s tour schedule," adds Biff. "It’s apt that we release it now. With that in mind, we would also like to share the following up-to-date stats with you all."

The band have also announced three UK dates to coincide with their headline appearance at Hard Rock Hell on November 9. They'll be supported at the new dates by Metal Queen Doro and rising stars The Wayward Sons.