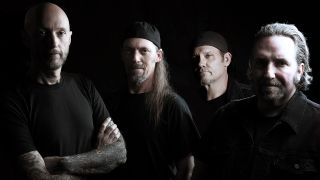 Sacred Reich have released a stream of their new single titled Don’t Do It Donnie.

It’s a standalone track and won't appear on the band’s upcoming album Awakenings, which is expected to be released this summer. It’ll be Sacred Reich’s first album since 1996’s Heal.

Don’t Do It Donnie will be released as a limited edition split 7-inch single on April 19, with Iron Reagan’s They Scream planned for the flip side.

Sacred Reich vocalist Phil Rind says: “We are stoked to do a split with Iron Reagan.  When we began as a band in 1986, we were influenced lyrically by punk bands and the Reagan era, so this is a great way to get back to our roots.

“The song is a heavy and cheeky middle finger to the politics of today. You'd think we'd have learned by now! There is a reason our first record is called Ignorance.”

It was reported in December that former Machine Head drummer Dave McClain had rejoined Sacred Reich after previously playing with the Phoenix-based band between 1991 and 1995.

Last month it was confirmed that guitarist and founding member Jason Rainey had stepped away from the group due to health concerns.

He’s been replaced in the lineup by Joey Radziwill who says: “I am stoked to join a band that I have been listening to since I was a kid. My parents are huge fans too and we are all super excited."

Sacred Reich will tour across Europe in November and December and will also set sail with Megadeth on their inaugural Megacruise in October.