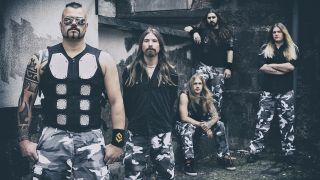 Sabaton have revealed that they’ll launch a YouTube channel next month dedicated to the stories behind their songs.

The band are known for writing material based on historical battles and war, with the Sabaton History Channel the result of a collaboration between the Swedish outfit and historian Indy Neidell and Timeghost.

Each weekly episode will focus on a Sabaton track and delve into the inspiration behind it – and the programmes will begin on February 7.

To mark the announcement, the band have shared a trailer where they and Neidell discuss what they have planned, while fans can subscribe to the channel right now.

Vocalist Joakim Brodén says: “For those of you who aren’t familiar with Indy, he’s the actor and historian behind The Great War, Between Two Wars and World War Two.

“We thought we would share some of these stories with you – not only how we wrote the songs, but also the people behind them and the true histories.”

Sabaton will head out on the road across Europe from May and will also headline the UK’s Bloodstock festival on August 9.