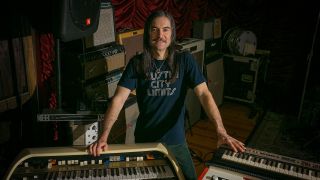 Former Jellyfish and Imperial Drag, not to mention current member of The Lickerish Quartet, Roger Jospeh Manning Jr has released a video trailer to announce the reissue of three of his long out-of-print solo releases. You can watch the trailer in full below.

2006's The Land Of Pure Imagination, 2008's Catnip Dynamite and 2018's Pledge Music EP Glamping are the three releases which have been remastered by longtime compatriot/mixing engineer John Paterno under Manning’s supervision and are now available digitally via Label Logic starting today. CDs and high-grade 180-gram vinyl LPs will be arriving later this fall.

“These albums were all really very personal experiments I was conducting,” Manning says about his remastered solo triple replay. “Obviously, there are songs on each of them that I could just do with an acoustic guitar and a vocal, but there’s so much more fun to be had by exploring all these densely layered journeys I made.

“Everything I’ve ever done as an artist, whether it was with Jellyfish or all the numerous solo and side projects of mine, has been trying to achieve what my greatest heroes did for me, even if it was just through one or two songs,” he acknowledges. “They transported me out of whatever my surroundings were, and they helped me forget about everything that’s going on in the world. Clearly, those songs were detouring me and catapulting me into a different realm instantly through sound. And that’s all I’ve ever wanted to do with my music.”