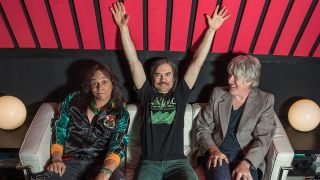 The band have released their first single, Lighthouse Spaceship, which you can listen to below. The re-uniting of the three musicians is the closest to a much-wanted Jellyfish reunion the music world has seen since the band's split in 1994, although Manning and former Jellyfish member Jason Falkner did open for Cheap Trick in 2008 performing some Jellyfish songs and Manning and Dover were in Manning's post-Jellyfish outfit Imperial Drag.

“While touring with Jellyfish, it was pretty clear to me that both Eric and Tim had plenty to say as writers in their own right,” Manning tells Prog. “All these years later, it was like picking up where we left off in many ways. Ultimately, the songs go on their own journeys, but I also think our collective vocal sound puts a stamp on all of them, no matter who’s singing lead. That’s what really joins it all together.”

“It’s a good feeling knowing we found a way to blend together again as the three of us, and then find new ways to explore our ideas,” adds Smiths. “I think all the songs we did make something magical out of the mundane aspects of daily life.”