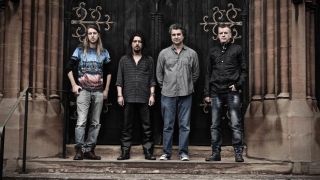 The band includes Magenta mainman Reed as well as Andy Edwards from Frost*, Luke Machin of Maschine and The Tangent, and Dylan Thompson from Shadow Of The Sun.

Their debut album Sign Of IV will be released in January via Tigermoth Records – a teaser video featuring the track Cold Black Heart was premiered by Prog last week.

On the benefits of joining the membership scheme, Edwards says: “We have just launched the Kiama club, where people can sign up and get access to exclusive video and audio content. These days there is so much music being released, with such a quick turnaround, that people don’t get enough time to digest an album.

“We plan to give Kiama club members all the tracks from the album, one a week, up the official release date in January. Also, we have lots of interview footage and studio footage.

“Finally the members will be able to buy a special three disc set of the album, the main album CD, a second CD full of extra tracks and different mixes, and a DVD with promo videos and 5.1 mixes.”

Visit www.kiamaband.com for more details on the Kiama Club.

Reed, meanwhile, is also working on the follow-up to 2014 solo album Sanctuary.