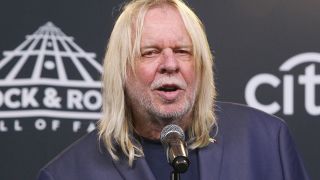 Rick Wakeman says it would have been “the decent thing to do” to retire the Yes name following the death of bassist Chris Squire in 2015.

The keyboardist was in conversation with Rolling Stone when he made the comments, as he also touched on the future of Yes featuring Anderson Rabin Wakeman.

Asked if it was true that he didn’t want ARW to have 'Yes' in the title, Wakeman responds: “No. I didn’t. I’m a funny old fellow. I have quite moralistic views.

“When Chris died, he was the only founding member still left in the band. He’s the only guy that had been in every incarnation of Yes, through thick and thin.

“I felt with so many different band members in and out that when Chris passed away, the decent thing to do would be to say, ‘OK, we’re putting the name Yes on the shelf. That’s it.’

“There’s nothing wrong with it, but it degraded the name and the word and the music by what happened after Chris died.”

Wakeman adds: “We did end up going out because promoters wanted it as Yes featuring ARW, but it just confused people. They had no idea who they were going to see and what was going on.

“It was wrong and I was very against it, I will admit. But we’re going to do some farewell shows next year and they are going to be ARW.

“It may be ‘ARW Performing an Evening of Yes Music.’ That’s fine. But not Yes in the name of the band.”

As for why ARW are planning a farewell tour, Wakeman points to the fact that “none of us are getting any younger health-wise and things” and talks about the arthritis in both his hands.

He says: “It’s controllable at the moment. I don’t take anything for it, pills or drugs, but I do exercises.

“I know I have to practice really hard to keep my fingers supple. I always said that I never want to walk onstage and not play to the standard I want to. I don’t want anyone to applaud anything I do because of what I used to do, so there comes a time to stop.

“I do have some days where they seize up quite a lot, but at the moment I can still play. The dexterity is still there. When I do the right exercises I am fine.”

He adds: “I reckon I have until probably the beginning to the end of 2022 and then I think I won’t be able to do it any more. I’ll still be able to play, but not up to the standard live that I do now.

“I’ll still be able to record and do music and the odd concert, but they will be different concerts. That’s my reason why I voted along with everyone, actually, that we’ll do a farewell/thank-you tour to the fans when you can still do the best you do while you still can.”

Wakeman is currently on his Grumpy Old Rock Star Tour across North America and will return to the UK in December for his Grumpy Old Christmas Show Tour.