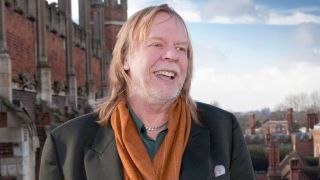 Rick Wakeman will host his own music festival later this year, he’s announced.

The keyboard icon will present a bill featuring artists he’s worked with throughout his career at Lincolnshire’s Boston Gliderdrome on the weekend of October 30 to November 1, 2015.

Already announced for Wakemanfest are Mike Livesley’s version of Vivian Stanshall’s Sir Henry At Rawlinson End, The English Rock Ensemble, the Strawbs, the Cadbury Sisters and others. Q&A sessions will take place throughout the weekend.

Wakeman says: “I wanted to create a festival I would want to go to myself. We chose the Gliderdrome because of its amazing history – I remember playing there many times over the years, especially with Yes. It all starts on the Friday, with a full day Saturday and a very special charity day on the Sunday, which finishes around 5pm so everybody can head off home.”

Further details including hotel deals will appear on the Wakemanfest website.