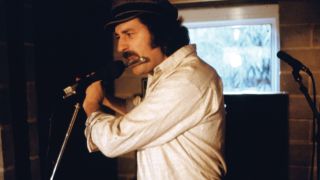 Ray Thomas was a crucial part of the Moody Blues’ history. His impact as musician and songwriter helped to establish them as one of the most dynamic and pioneering of all progressive bands in three decades, from the 1960s, through the 70s and into the 80s.

He once said of his role: “I never thought of myself as being very gifted. I was happy, though, to have played a part in bringing out the talents of those around me.”

Born on December 29, 1941 in Stourport On Severn, Thomas started a band called El Riot And The Rebels in Birmingham during the early 60s, alongside John Lodge and Mike Pinder. Thomas and Pinder subsequently stayed together in the Krew Cats, who started in 1963, before bringing in Denny Laine, Graeme Edge and Clint Walker as they became the Moody Blues a year later.

Initially, their sound was predicated on the blues and they had some early success in this vein. However, it was when the classic line-up featuring Thomas, Pinder and Edge alongside Lodge and Justin Hayward came together in 1966 that the band found their musical direction and style.

The release of the album Days Of Future Passed in 1967 set the tone, with its symphonic sensibility, and Thomas was a crucial part of the process, as a confident and creative flautist.

“We really were doing things that were out of our comfort zone,” he said a few years ago. “That made it so exciting. I felt that, as a musician, I suddenly had a blank canvas on which to paint whatever I felt would work.”

One of his finest compositions, Legend Of A Mind, was featured on the 1968 album In Search Of The Lost Chord. It was written about Timothy Leary.

As the Moodies continued to enjoy success over the next decade, Thomas’ contributions as musician, vocalist and composer was a core part of everything. And when the band went on hiatus in 74, he released the albums From Mighty Oaks (1975) and Hopes Wishes And Dreams (a year later) proved he had the ability to make his own mark away from the mothership.

Naturally, Thomas was part of the Moody Blues when they reunited in 1977, and Veteran Cosmic Rocker, which was written by him for 1981’s Long Distance Voyager became something of an anthem for the band. It included a backwards message from Thomas at the end, in which he says ‘What happens anyway, you know?’.

“We just thought it would be a bit of fun to have backwards masking in there, just to get people talking and wondering!”

But ill health forced him to take a decreasing role in the band, with his last appearance on an album coming with 1999’s Strange Times. And in October 2014, he revealed that he had been diagnosed with prostate cancer in the following statement.

“My cancer was in-operable but I have a fantastic doctor who immediately started me on a new treatment that has had 90% success rate. The cancer is being held in remission but I’ll be receiving this treatment for the rest of my life. I have four close friends who have all endured some kind of surgery or treatment for this cancer and all are doing well. While I don’t like to talk publicly about my health problems, after Alvin [Stardust]’s death, I decided it was time I spoke out. A cancer diagnosis can shake your world and your family’s but if caught in time it can be cured or held in remission. I urge all males to get tested NOW. Don’t put it off by thinking it won’t happen to me. It needs to be caught early. It’s only a blood test - a few minutes out your day to save yourself from this disease. Love and God Bless, Ray.”

However, Thomas was working on a new solo album, as he explained in 2015.

“I’m not going to put myself under pressure like I used to. When I write a song, I don’t like it hanging around because I start picking at it, trying to change it, and inevitably you fuck it up. So as I write one, I’ll go down to the local studio and record it as a whim. I haven’t got a deadline; I’m getting too old for all that pressure. I’ll just do it when I can.”

Thomas was not only a superb flautist (despite being fully self-taught) and a fine singer, but he also played a variety of other instruments, including the saxophone, harmonica, oboe and maracas. He also had a keen sense of humour as was evidenced when he once said, “I love the fact the Moody Blues are around without me, because that means all those records I’m on are still selling and making me money!”

Thomas might never have been a high profile star, but his contribution to progressive music was inestimable. All you have to do is listen to those classic Moody Blues albums to know what he has meant to the music we all love.