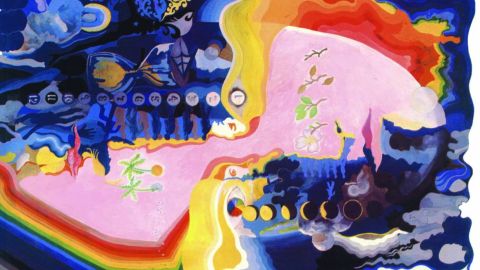 Whether it’s the first concept work or progressive album will always be subject to forensic debate, but Days Of Future Passed undoubtedly took post- Sgt Pepper British rock to another level as the Moody Blues framed themselves in full-bore classical orchestration. If the Beatles had opened the door to pop using classical musicians, Days… was the first time an orchestra had commanded centre stage and got equal billing on the cover.

In doing so, the Moodies placed themselves ahead of a pack still swathing themselves in psychedelic whimsy or endless jamming, repositioning rock as mature enough now to employ classical music’s tradition. When they started recording in spring 1967, the band had recently dealt with failing to follow the success of 1964’s Go Now with a personnel shuffle that saw Mike Pinder, Ray Thomas and Graeme Edge joined by John Lodge and Justin Hayward, a decision to play only their own compositions and a symphonic makeover inspired by Pinder’s Mellotron, the orchestra-in-a-keyboard he had introduced to the Beatles for Strawberry Fields Forever. The Moodies found songs such as Peak Hour and Nights In White Satin fitted their emerging concept around a single day in an average worker’s life, convincing arranger-conductor Peter Knight to re-plot their music and conduct the fictional London Festival Orchestra, who supplied an overture, between-song links and an epic conclusion. Released as a single, Nights In White Satin became a melancholy classic – although, like the album, it took years to be fully recognised.

The reissue leads with the original 1967 stereo mix making its CD debut, restored through modern technology after being too damaged for decades. The music has stood the test of time well, although Edge’s bookending poems (The Day Begins and Late Lament) show they’d heard the The Zodiac’s Cosmic Sounds. Between florid orchestral bridges, the Moodies dispense spirited freakbeat rockers like Twilight Time and Peak Hour but come into themselves on widescreen ballads such as the beautifully haunting Tuesday Afternoon.

After the disc is completed by three 1967 BBC sessions, CD two comprises a version constructed from the 1972 Quad Mix plus alternative mixes. The set is completed with a DVD of them performing at the MIDEM festival in January 1968.

This year has been particularly demanding on prog fans’ pockets as a seminal 1967 is marked by endless 50th anniversary boxsets. But few are more deserving of the deluxe treatment than the tumultuously grandiose work that launched the classical-prog crossover.