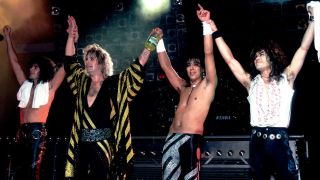 A documentary on late Ozzy Osbourne and Motley Crue drummer Randy Castillo will be premiered in November, producers have announced.

Entitled The Life, Blood And Rhythm Of Randy Castillo, the movie tracks the life and times of the Native American musician, who died of cancer aged 51 in 2002.

Director Wynn Ponder says: “It’s been a magical journey working with Lita and interviewing Randy’s bandmates, family and friends. But the real story is about how Randy’s generous spirit never changed, even when his formidable musical talent made him the first internationally famous Apache rock and roll drummer.

“Randy Castillo was that rare creature known as a ‘good man.’ He was a confidante and a close friend to many, compassionate and caring with everyone he met.

“Some interviewees tell stories of Randy’s supernatural powers, which they attribute to his Native American spirituality.”

The film will be premiered at the Red Nation Film Festival in Beverly Hills, California on November 4. Find out more.