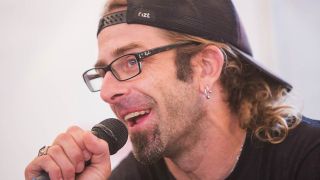 The Lamb Of God frontman will get to work on the fictional tale later this year, once the band’s touring commitments are over and after he’s put the finishing touches to a photobook he’s also working on.

Blythe tells Metal Hammer’s Chris Chantler: ”I’m working on an outline for a book, but that’s about as much as I can do while I’m on the road. Writing a book makes writing a record look like going to kindergarten. It’s a much more tense, concerted, extended, creative effort – it requires a lot of focus that this environment does not provide.

“It’s set 50 to 100 years in the future. I’m wracking my brain right now, because you have to figure out all sorts of little things we don’t think about, because of the incredibly rapid advancement of technology.

“I’ve been thinking about the plot, and at first I thought, ‘Oh the ending’s just got to be awful.’ But then I thought, ‘That’s self­-indulgent.’ I’ve been thinking about how I can make the end of the book optimistic, and it’s hard. And I haven’t decided how it’s going to end, but more than likely there’s got to be an optimistic end. Otherwise, I’ll just be fucking depressed. And real life is depressing enough.”

Despite the futuristic plot, Blythe plans to inject some level of “inherent truth” into his prose.

He adds: “Fiction should still carry an inherent truth. And there will be societal commentary, that’s what the book will be about. Where our society is heading, and some of the things shaping the human psyche. I hope it’ll communicate some universal truth. It’s not too hard to find extraordinary situations in real life, to draw inspiration from.”

Blythe released his first book Dark Days last year. It was based on his Prague prison ordeal. He says he’s confident his fictional effort will be a success as he believes he has already found his literary voice.

“I’m a decent writer,” he says. “Without trying to be an asshole, but, I am. I’ve spent my entire life reading good literature, and I’m able to tell a story. If I wasn’t a good writer I would still struggle to become one, and write the book by myself.

“The most important thing about a narrative is the author’s voice. And my voice comes across. And that’s one of the hardest things, a lot of writers struggle for three or four books to find their voice. And most people who knew me, and famous writers I know, were like, ‘Your voice is there, it’s strong.’

“I think I kinda got off easy, because it’s my story. The next book will be fiction, so trying to put my voice into fictional situations is going to be interesting. Writing in my voice was really rather easy for me. Because I talk all the fuckin’ time.”

Lamb Of God’s most recent album, VII: Sturm Und Drang, was issued last summer. This month they launch a US tour with Anthrax.