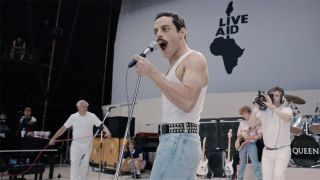 Apple Music have released a 16-minute feature film focusing on Rami Malek as he became Freddie Mercury in the Queen biopic Bohemian Rhapsody.

While the film has proved to be a massive success around the world, Malek’s portrayal of Mercury has been the focal point – and it’s a performance which has seen the Mr Robot actor pick up a Golden Globe for the role, while he’s also been nominated for a BAFTA in the Leading Actor category.

The 16-minute film features clips from the movie, behind-the-scenes footage and interviews with the cast and crew who brought the project to life, along with Queen's Roger Taylor and Brian May.

Malek says: "There are so many different faces of Freddie Mercury and I don’t think one is more true than the other.

“He just can reach you, almost as if you're the only person in the room no matter where you are watching. And it’s that exchange that makes him one of the most unique and remarkable and revolutionary artists of our time – or of any time.”

Praising Malek’s performance, Taylor says: “He sort of invented himself. It was an act of pure willpower and intelligence to manage the raw material and turn himself into Mercury.”

A trailer can be seen below, while the full film can be watched through Apple Music.

Malek is joined in the cast by Gwilym Lee as May, Ben Hardy as Taylor, Joe Mazzello as John Deacon and Lucy Boynton as Mary Austin.

Earlier today, it was announced that Fox and New Regency will screen a special sing-along version of the film at 750 locations across the US and Canada.

Bohemian Rhapsody will be released on DVD, Blu-ray and on 4K digital on March 4 via 20th Century Fox Home Entertainment.