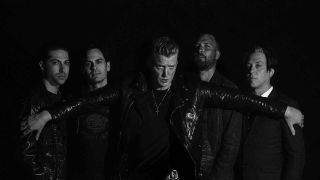 Queens Of The Stone Age have released The Way You Used To Do, the first track from their upcoming album Villains, the follow-up to 2013’s …Like Clockwork.

The album was produced by Mark Ronson, who has previously worked with the likes of Amy Winehouse, Paul McCartney, Lady Gaga and Adele, and will be released on August 25. Pre-orders are available now.

“The most important aspect of making this record was redefining our sound, asking and answering the question ‘what do we sound like now?’, ” says Queens frontman Josh Homme. “If you can’t make a great first record, you should just stop—but if you can make a great record but you keep making records and your sound doesn’t evolve, you become a parody of that original sound.”

“Queens are and have always been my favourite rock’n’roll band ever since I walked into Tower on Sunset and bought Rated R in the summer of 2000,” says Ronson. “So it was incredibly surreal to be welcomed into their secret, pirate clan—or the ‘jacuzzi’ as Josh likes to call it. I also knew that my super fandom alone would not keep me in the jacuzzi. There were moments during the making of the album in which i was aware I was watching my musical heroes craft something that was sure to become one of my favourite moments on any Queens album. And to have some part in that felt like being in a dream–a very heavy, dark, wonderful dream.”

The band have also announced for UK and Ireland dates for November (full dates below).

Queens Of The Stone Age's Josh Homme on Guns, God, and America